Home » PARKS AND GARDENS » Fernkloof Nature Reserve » Metalasia erubescens
Back to Category Overview
Total images in all categories: 8,984
Total number of hits on all images: 3,986,248 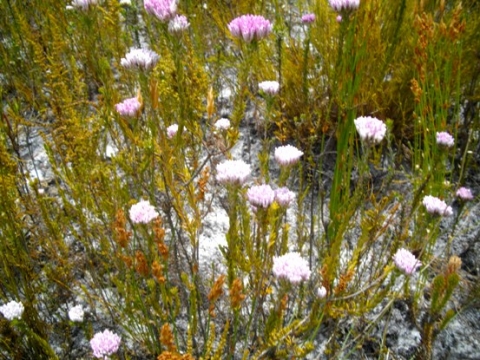 This Fernkloof Metalasia erubescens plant is finding the December weather taxing, judged by the yellowness of its foliage. Winter rain will turn the leaves green. The upper stems are covered in narrow, hairy, twisted leaves, sometimes growing in tufts. Lower stem parts tend to become bare as older leaves drop off. Leaves may be as short as 2 mm or as long as 18 mm. The plant is covered in white and woolly hairs.

The distribution of this species is Western Cape coastal flats and slopes from Elgin and Kleinmond to Caledon and Agulhas. The habitat is fynbos in sandy soil. The species is not considered to be threatened in its habitat early in the twenty first century (Bean and Johns, 2005; http://redlist.sanbi.org).