Home » TYPES » Mesembs » Psilocaulon articulatum
Back to Category Overview
Total images in all categories: 12,068
Total number of hits on all images: 7,360,682 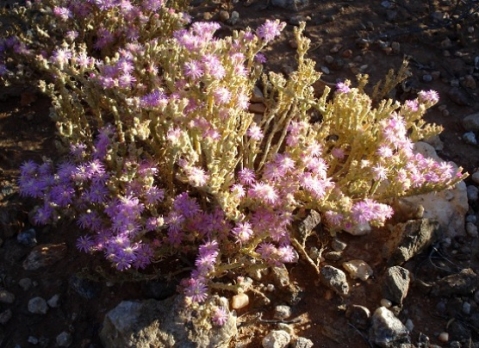 Psilocaulon articulatum, the hairy asbos (ash bush) or seepbos (soap bush), is a much branched shrublet with some erect, some spreading stems. It grows to a height of around 40 cm. Psilos means bare or smooth, kaulos is stalk, both words from the Greek, bringing about the generic name of these bare stem plants.

This specimen was found late in April near Groblershoop in the Northern Cape, still flowering, although blooming normally begins in spring and ends around midsummer. The plant was traditionally used in this region to construct cooking shelters at the fireplaces of mainly nomadic people. Stacking the dense bushes to 2 m or more must have required quite a few plants at a time.

The plant has a large distribution, covering about the western half of South Africa and southern Namibia. The plant is not considered to be threatened in its habitat early in the twenty first century (Bond and Goldblatt, 1984; iSpot; http://redlist.sanbi.org).