Home » TYPES » Mesembs » Psammophora modesta
Back to Category Overview
Total images in all categories: 12,068
Total number of hits on all images: 7,360,803 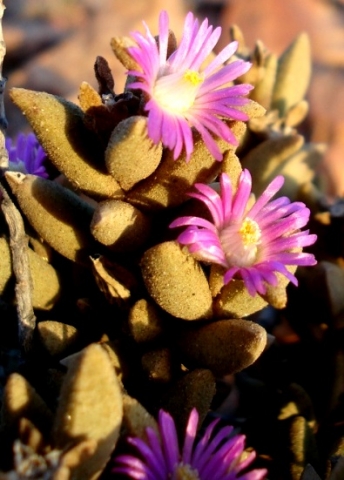 Psammophora modesta, in Afrikaans a gomvy (gum fig), is a dwarf shrublet. The genus, comprising only four species, has been named for the tendency of the plants to collect grains of sand on their sticky leaves: Psammos (sand) and phorein (to bear), both Greek words, capture this characteristic.

From time to time the leaf covers will peel off like scabs, collecting more sand on the new, still sticky surfaces. The succulent green leaves are barrel-shaped, slightly angular with pointed tips, but often look brown from their sandy covers.

The pale pinkish-violet flowers grow solitary on short pedicels, each having two pairs of bracts. The flower is small with one whorl of petals.  In the flower centre a dense cluster of white stamens and staminodes converges into a yellow-tipped cone. The stamens have yellow anthers, the sterile staminodes don't. Five sticky and unequal sepals resembling the leaves, are positioned below the petals. The nectar glands form a ring in the flower base around the thread-like stigmas. The flowering season is late autumn to midwinter.

The plant is found in South Africa only in the extreme northwest of the Richtersveld. Over the border it is more widely distributed along the southern Namibian coast.

The habitat is arid, receiving low winter rain. The species is not considered to be threatened in its habitat early in the twenty first century (Smith, et al, 1998; http://redlist.sanbi.org).