Home » TYPES » Mesembs » Prepodesma orpenii
Back to Category Overview
Total images in all categories: 11,894
Total number of hits on all images: 7,135,024 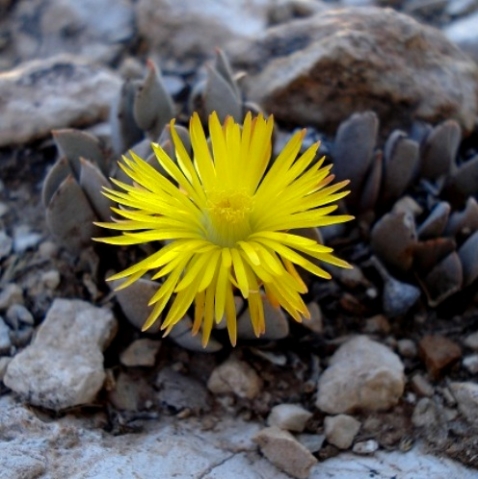 Prepodesma orpenii is also still known as Aloinopsis orpenii (or maybe should be called that). The Prepodesma genus is monotypic; disappears if this plant is classified elsewhere. Whichever way that decision goes, the plant is a miniature succulent of the Aizoaceae or mesemb family.

P. orpenii has leaves that are pale-grey here, but will appear greener and fuller after (winter) rain; two to four leaf pairs are usually produced on a plant per season. The leaves are often erect, but not always. Leaf surfaces are uneven, dotted with tiny dark spots. Leaf pairs are keeled and have angular margins, triangular in cross-section. Near its tip the leaf tapers, sometimes abruptly.

The photo was taken in April east of Kuruman, the area where this species is endemic. The habitat is characterised by barren loamy shale or quartzitic limestone. The species is not considered to be threatened in its habitat early in the twenty first century (Smith, et al, 1998; iSpot; www.llifle.com; http://redlist.sanbi.org).