Home » TYPES » Mesembs » Phyllobolus prasinus
Back to Category Overview
Total images in all categories: 11,506
Total number of hits on all images: 6,494,273 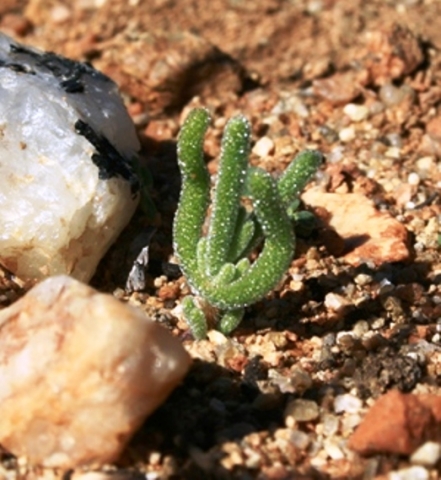 Phyllobolus prasinus is thought to be the identity of this plant. The genus Phyllobolus has some interesting looking members with finger-like leaves, some with conspicuous shiny water cells on the surface. Some literature photos of P. prasinus show water cells, others don’t, so there is some doubt.

The photo here has no flower to help in the process apart from clearly manifesting water cells on long fingers. The species Phyllolobus digitatus that in America is commonly called the hitch-hiker has no water cells.

Phyllon (leaf) and bolus (to throw or cast) refer to the deciduous leaves of some of these plants of the Aizoaceae family. Phyllobolus plants are erect or creeping perennial shrubs, often with a tuberous rootstock (which usually goes with the leaves being deciduous, as the rootstock is there to preserve the plant during the resting season). Their seeds are characteristically large for Aizoaceae, black with a crest or brown without one (Smith, et al, 1998).