Home » TYPES » Mesembs » Ruschiella argentea
Back to Category Overview
Total images in all categories: 11,656
Total number of hits on all images: 6,771,297 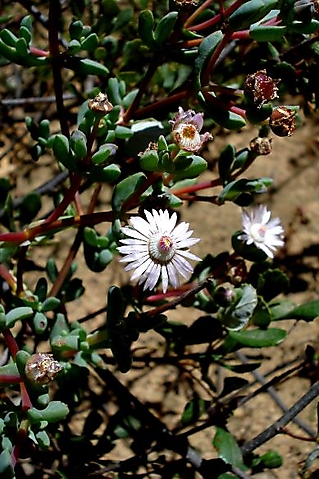 Ruschiella argentea, previously Lampranthus argenteus, is a leaf succulent, a spreading to erect shrublet reaching 25 cm in height. The smooth red stems are conspicuous as the leafless internodes tend to elongate; opposite branches characteristically angled up.

The species distribution is in the Western Cape from Clanwilliam to Montagu, maybe more widely.

The habitat is fynbos and karoid scrub where the plants grow in the open or among taller shrubs. The species is not considered to be threatened in its habitat early in the twenty first century (iNaturalist; https://enjoysucculents.com; http://redlist.sanbi.org).