Home » TYPES » Mesembs » Rhombophyllum dolabriforme
Back to Category Overview
Total images in all categories: 11,656
Total number of hits on all images: 6,771,355 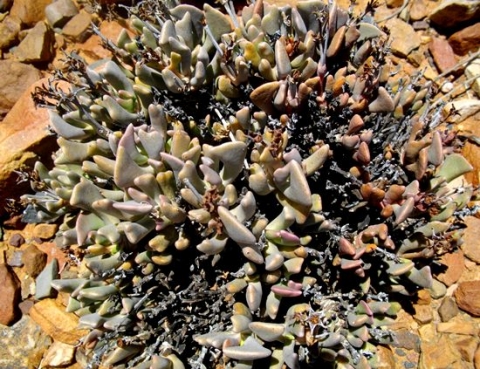 The flowers grow solitary or in small clusters. They have longish stalks that characteristically persist on the plant, sometimes in dry, brown, spiny shapes. The petals forming two or three spreading whorls are bright yellow. The large cone or cylinder of erect stamens in the flower centre is also yellow, more so on the anthers than the paler filaments. Nectar glands are present in the flower base around the five thin stigmas.

Flowering happens in spring or early summer; the flowers open in the afternoon or early evening.

The species distribution is mainly in the Eastern Cape from Graaff-Reinet to Willowmore and slightly westward into the Western Cape. The photo was taken next to the road from Beaufort West to De Rust.

The habitat is arid or semi-arid shale hills or sandstone slopes, the plants often growing among stones. The species is not considered to be threatened in its habitat early in the twenty first century (Frandsen, 2017; Smith, et al, 1998; iSpot; www.llifle.com; www.redlist.sanbi.org).