Home » TYPES » Mesembs » Polymita albiflora
Back to Category Overview
Total images in all categories: 11,901
Total number of hits on all images: 7,141,777 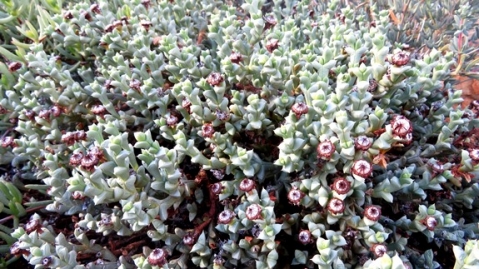 Polymita albiflora is a robust, hairless shrub that branches much, reaching 40 cm in height. Both the species forming this genus bear white flowers with long, thin petals. Polymita is derived from the Greek words poly meaning many and mita meaning small petals.

The flowers, 2 cm in diameter, occur solitary or in clusters. Five fleshy sepals enclose the flower base. The stamens in the flower centre curve in, surrounded and concealed by four whorls of numerous white, filamentous staminodes, i.e. infertile stamens lacking anthers. The scented flowers open in daylight and close at night. Flowering happens in late spring.

There is a possibility of a name change to Schlechteranthus albiflorus that at the time of writing seemed uncertain.

The species is endemic to the Northern Cape where the plants are found widespread in Namaqualand from the Kamiesberg to Steinkopf. The photo was taken at Goegap.

The plants grow in Nama and succulent Karoo habitat as well as in fynbos in crevices on quartzite slopes and shallow pockets of granitic soil. The species is not considered to be threatened in its habitat early in the twenty first century (Smith, et al, 1998; Herre, 1971; iNaturalist; http://redlist.sanbi.org).