Home » TYPES » Mesembs » Schlechteranthus hallii
Back to Category Overview
Total images in all categories: 11,792
Total number of hits on all images: 6,949,334 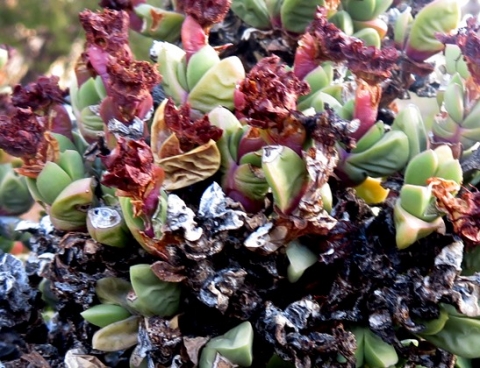 Its leaves are crowded upon the stems, concealing the stem internodes. The equal, opposite leaf-pairs are united into leaf-bodies in their lower halves, decussate up the stems. The leaves are smooth and glossy, pale grey-green (sometimes reddened in trying times). The leaf is flat on its inner surface and deeply keeled on the outer one, thus triangular in cross-section. One or two teeth may occur on the keel ridge or margins and the leaf tip may be mucronate, finely protruding. Leaf bodies are about 5 mm long and equally wide.

This Northern Cape endemic species is restricted to the central and northern parts of the Richtersveld from Sendelingsdrif to Eksteenfontein and Vioolsdrif.

The habitat is sparse succulent Karoo on quartzitic slopes and outcrops at elevations from 300 m to 750 m. This arid region receives a little winter rain only. The species is not considered to be threatened in its habitat early in the twenty first century (Williamson, 2010; Smith, et al, 1998; Herre, 1971; iNaturalist; http://redlist.sanbi.org).