Home » TYPES » Mesembs » Rabiea flowers
Back to Category Overview
Total images in all categories: 11,933
Total number of hits on all images: 7,175,295 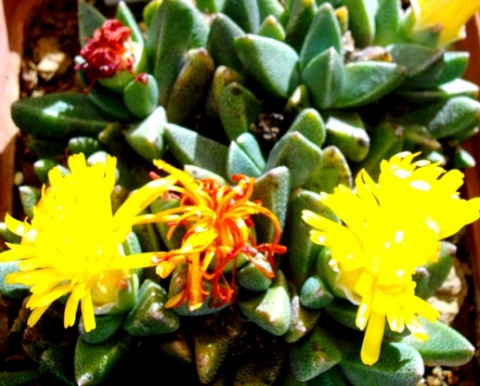 More cues are needed for identifying the species of this flowering Rabiea plant. All six the Rabiea species, including the few recognised varieties, flower bright yellow to orange. Flowering of the genus happens in spring or summer, the flowers opening by midday and closing at dusk.

Rabiea plants resemble some Hereroa ones to varying degrees. The fruit capsules in Rabiea are nearly stalkless, thick-walled and darkly coloured, the capsules comprising between seven and ten locules. This should contribute to distinguishing at least between these genera (Smith, et al, 1998).