Home » TYPES » Mesembs » Phyllobolus oculatus
Back to Category Overview
Total images in all categories: 11,905
Total number of hits on all images: 7,155,870 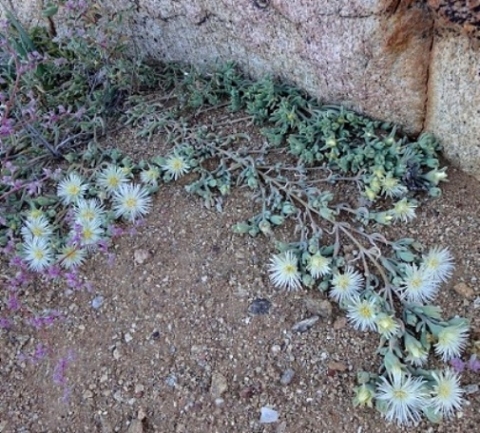 Phyllobolus oculatus is a creeping succulent that may form mats as large as a square meter. The plant has a thickened taproot. Older stems tend to become woody.

The succulent leaves have conspicuous bladder cells along their surfaces. Leaf shape is narrow, varying between triangular and lanceolate. Phyllon means leaf in Greek, while bolus means throw in Latin, referring to several of the members of the genus that are deciduous, casting their leaves off annually.

Long trailing branches presenting many flowers in September have been grown by this plant, found in northern Namaqualand. The flowers are creamy white with pale yellow centres. There are also salmon pink and beige colour forms of this mesemb. The filamentous staminodes present in the flower centres diverge, as they do in several more of the Phyllobolus species. This contrasts with the central columns or cones of staminodes and stamens, common in many other mesemb flowers (Smith, et al, 1998).