Home » TYPES » Herbs » Pentanisia angustifolia
Back to Category Overview
Total images in all categories: 12,081
Total number of hits on all images: 7,379,233 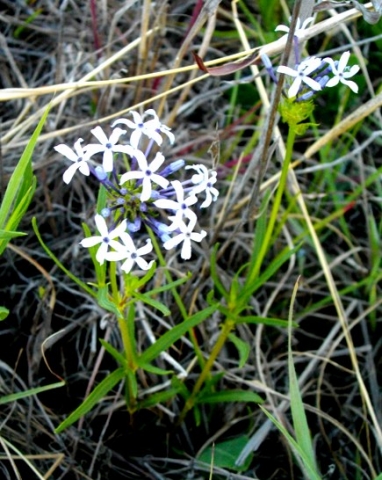 In Pentanisia angustifolia the sepals or calyx lobes are leaf-like and green or foliaceous, also distinctly variable. This can just be discerned at the base of the flower tubes in this picture taken on the southern slope of the Magaliesberg in December.

The name of the Pentanisia genus was derived from the unequal sepals characterising some of the species: the Greek word anisos means unequal while pente means five, denoting the number of sepals and corolla lobes in (some of) the 15 species.

The P. angustifolia species distribution is in the east of South Africa, from the Eastern Cape to Limpopo and including Gauteng and North West; also in Lesotho, Swaziland and Mozambique. The habitat is summer rainfall grassland. The species is not considered to be threatened in its habitat early in the twenty first century.

P. prunelloides corolla lobes taper towards their tips, while P. angustifolia has oblong corolla lobes. Apart from these two species, there is a third South African one, growing in the Soutpansberg, viz. P. sykesii.