Home » TYPES » Herbs » Oncosiphon piluliferum using an opportunity
Back to Category Overview
Total images in all categories: 12,061
Total number of hits on all images: 7,359,899 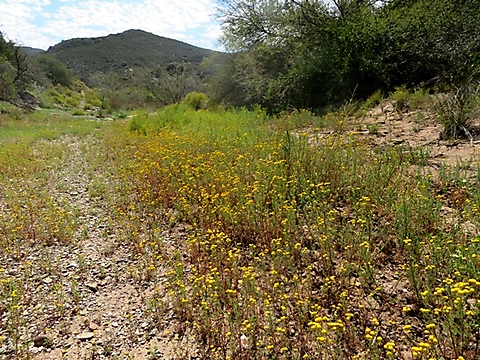 Heading into summer during October, a colony of Oncosiphon piluliferum may show strain imposed by the increasingly dry and hot weather. It may also merely be reaching the end of its annual cycle, involving the setting of seed and dying. Or a bit of both.

Disturbed land often gives this plant an opportunity to take over in dominant stands. The photo of a rarely used road was taken in a karoid setting in the west of the Little Karoo (Vlok and Schutte-Vlok, 2015; Shearing and Van Heerden, 2008; Van Wyk and Malan, 1997; iNaturalist).