Home » TYPES » Herbs » Papaver aculeatum
Back to Category Overview
Total images in all categories: 12,091
Total number of hits on all images: 7,393,180 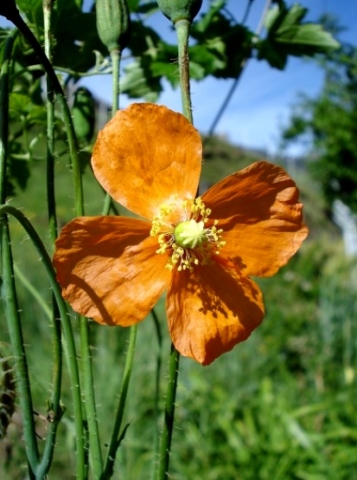 Papaver aculeatum, the orange poppy, bristle poppy or in Afrikaans the doringpapawer (thorn poppy), is a tufted, prickly annual that grows to 1 m. The leaves are deeply lobed and toothed. They have stiff yellow prickles along their surfaces.

The flowers grow on long, erect stalks. Flowers have four broadly obovate petals forming a shallow bowl, about 5 cm in diameter. The corolla colour is orange or salmon pink. A cluster of small stamens encircle the large ovary and stigma. Flowering happens from late spring to mid-autumn.

The distribution is large in the inland central to eastern parts of South Africa, while it has been reported growing in all nine provinces. The habitat is lower slopes and disturbed ground in sandy soil and summer rainfall. The species is not considered to be threatened in its habitat early in the twenty first century.

This plant is said to be the only poppy originating from the southern hemisphere, indigenous to South Africa, Swaziland and Lesotho. The plant is also found in Australia, but it is unknown whether it has been introduced there or should be considered indigenous (Manning, 2009; iSpot; Eliovson, 1984; www.plantgenesis.co.uk; http://redlist.sanbi.org).