Home » TYPES » Herbs » Phygelius aequalis flowers
Back to Category Overview
Total images in all categories: 11,506
Total number of hits on all images: 6,491,872 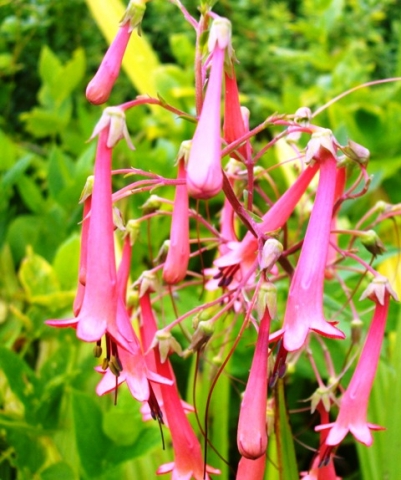 Phygelius aequalis has earned its place as a garden plant due to its long blooming season manifested in a profusion of pendulous trumpet flowers and its robust growth. It is cold resistant, coming from the high altitude regions of the Drakensberg and the Malutis, thriving in moist places.

The flower tubes are characteristically long and thin, opening gradually into five acute petal points at the mouth. The four dark red stamens protrude. They occur in two unequal pairs within each flower. The yellow flowering form is also popular, while there is a purplish pink variety besides the common salmon-pink one. Several garden cultivars have been produced from the two species, P. aequalis and P. capensis, both South African, as well as from their natural hybrids.

The name Phygelius may be derived from the Greek words phyge (flight) and helios (sun), possibly meaning that the plant flees from the sun, being shade loving as it often grows in forests. Aequalis meaning equal in size may refer to the conspicuously long flower tubes (Manning, 2009; www.plantzafrica.com).