Home » TYPES » Herbs » Oncosiphon piluliferum flowerheads and diners
Back to Category Overview
Total images in all categories: 11,528
Total number of hits on all images: 6,614,439 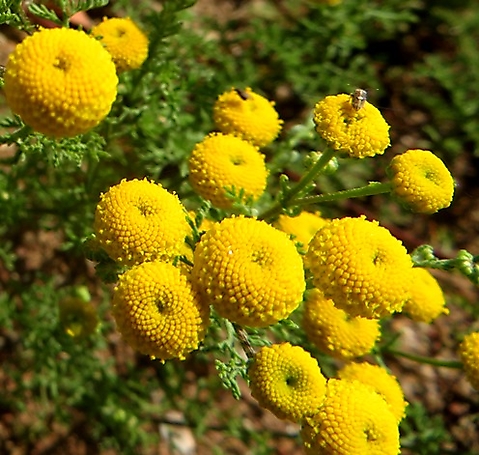 The heads are nearly globose, comprising numerous, tiny disc florets; no ray florets. The bisexual, tightly packed florets are four-lobed. In picture most of the florets are still closed buds, neatly arranged in curving rows. The bracts that initially close over each flowerhead are forced open and down; a green plate invisible below the floret, until one takes the trouble to inspect its lower surface.

Open florets are seen along some of the head perimeters in picture. The last florets to open are the ones in the centre of each head. Flowerheads become about 5 mm in diameter.

The generic name, Oncosiphon, is derived from the Greek words oncos meaning mass or bulk and siphon meaning tube, referring to the swollen floret tubes of the genus.