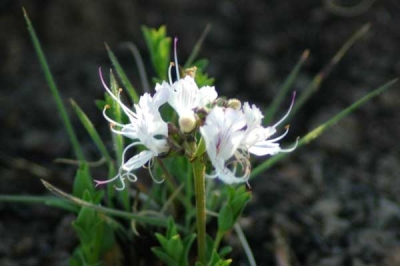 Ocimum obovatum, previously Becium obovatum and commonly known as cat's whiskers, is a deciduous perennial, sprouting annually from a perennial rootstock. Its flowers may be pale mauve, purple or white.

The species distribution is from the Eastern Cape to the highveld and northwards to East Africa as well as into Asia, specifically India. The photo was taken in the Rhenosterspruit Conservancy in Gauteng.

The habitat is mostly summer rainfall grassland. The species is not considered to be threatened in its habitat early in the twenty first century (www.plantzafrica.com; http://redlist.sanbi.org).