Home » TYPES » Herbs » Ocimum labiatum flowers
Back to Category Overview
Total images in all categories: 11,238
Total number of hits on all images: 5,948,321 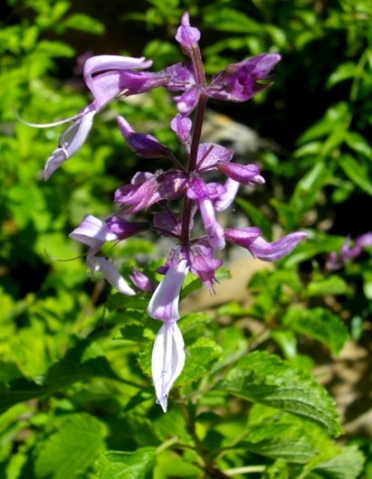 The flowers of Ocimum labiatum, commonly known as the pink sage, are produced in spaced whorls upon the flowering stems. Ovate bracts are conspicuous around the buds.

The calyx of 4 mm long is five-lobed and two-lipped, the upper larger and rounded, the lower pointed. The calyx expands later when the fruit is produced. The corolla tube is up to 1 cm long, funnel-shaped and curving down.

Flower colour is pinkish purple, the corolla paler than the calyx. The corolla is laterally symmetric, two-lipped with the lower lip boat-shaped, the upper one recurving markedly. The specific name, labiatum is derived from the Latin, referring to the corolla lips. There are four exserted stamens in two dissimilar pairs.

The blooming season is long, from spring to autumn (www.zimbabweflora.co.zw).