Home » TYPES » Herbs » Oncosiphon piluliferum
Back to Category Overview
Total images in all categories: 12,081
Total number of hits on all images: 7,378,948 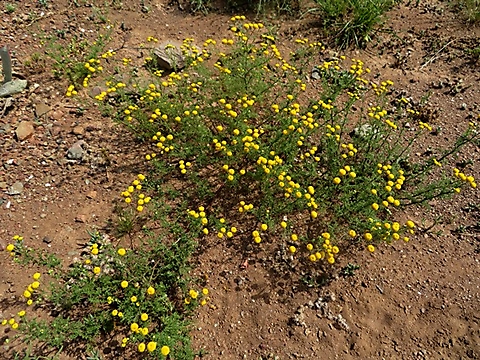 Oncosiphon piluliferum is internationally known as stinknet or globe chamomile. Both names are common in the USA where the plant has become a notorious and troublesome weed; another example of ill-advised and uncontrolled species export.

Locally the plant is rarely disliked in spite of its unusual smell, reflected in the Afrikaans names of Karoostinkkruid (Karoo stink herb) or just stinkkruid. It was previously scientifically known as Pentzia pilulifera.

The species distribution is widespread in South Africa, occurring in all provinces with the possible exception of Limpopo. The plant also grows naturally in other parts of southern Africa. The photo was taken west of Barrydale.

The species habitat is grassland, dry lowland flats and occasional to permanent watercourses. The plants grow in different but often loamy soils; not in fynbos or much in renosterveld. These plants proliferate on disturbed ground like fallow fields and road reserves. The species is not considered to be threatened in its habitat early in the twenty first century (Vlok and Schutte-Vlok, 2015; Shearing and Van Heerden, 2008; Van Wyk and Malan, 1997; iNaturalist; http://redlist.sanbi.org).