Home » TYPES » Herbs » Eriosema salignum
Back to Category Overview
Total images in all categories: 11,538
Total number of hits on all images: 6,617,279 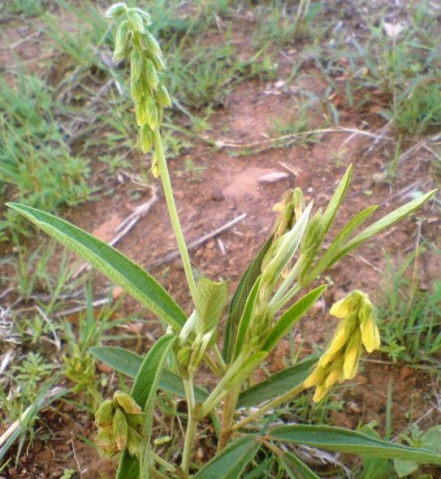 Eriosema salignum, commonly known as brown bonnets, is a perennial with slender, erect stems growing to 30 cm. The stems, flower and leaf stalks are all covered in silky hairs.

The leaves are trifoliolate with brown stipules at the base of the petioles. Leaflets are narrow and elliptic, curving and folding in along their midribs. The leaflets are whitish with silvery hairs below, hairless on top. Leaf veins are conspicuous, sunken on the upper surface, prominent below.

The flowers, appearing all year round apart from in midwinter, grow in racemes and face downwards, pendulous from their pedicels. Flower colour is yellow, sometimes orange. The calyx is whitish with silvery hairs; calyx lobes have long, narrowly acute tips.

The distribution of this species is widespread across the eastern parts of South Africa, as well as in Lesotho, Swaziland and southern Mozambique. This flower was photographed near the foot of the southern slope of the Magaliesberg, between Hekpoort and Scheerpoort.

The plant's habitat is grassland, often in clayey soils. The species is not considered to be threatened in its habitat early in the twenty first century (Manning, 2009; Van Wyk and Malan, 1997; www.redlist.sanbi.org).