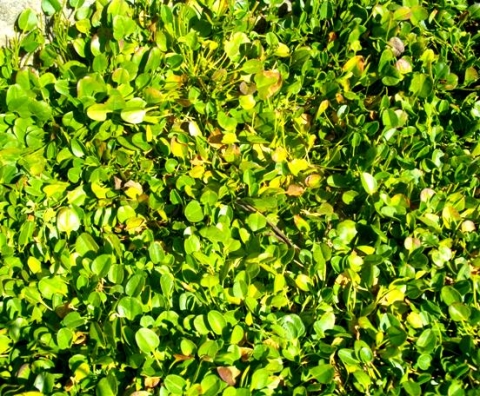 Falkia repens, in Afrikaans called oortjies (little ears), is a creeping, perennial herb. The slightly succulent leaves are green or yellowish green and shiny, forming a dense mat flat on the ground. They are broadly ovate with rounded tips and bases, held erectly on long petioles. The leaf often folds in slightly along the visible midrib.

Flowers of Falkia repens are white or pale pink, spreading in broad funnel-shape with rounded corolla lobes. They grow solitary on erect stalks from leaf axils above the leaves.

The plant is found in the Eastern Cape, the Western Cape and the Free State. Its habitat is moist grasslands, vleis and on stream banks, especially in coastal regions. The species is not considered to be threatened in its habitat early in the twenty first century (Moriarty, 1997; Gledhill, 1981; http://redlist.sanbi.org).