Home » TYPES » Herbs » Evolvulus alsinoides
Back to Category Overview
Total images in all categories: 11,506
Total number of hits on all images: 6,499,086 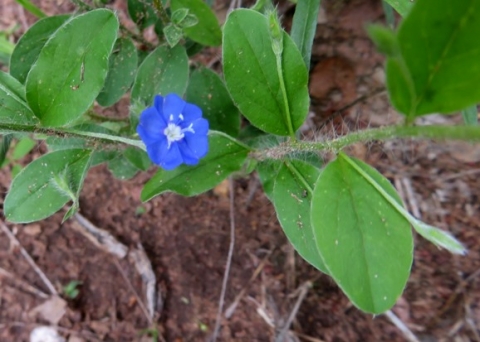 Evolvulus alsinoides is an erect or somewhat trailing herb growing from a perennial taproot to 20 cm, occasionally 60 cm. Belonging to the Convolvulaceae or morning glory family, the E- and not the Con- at the start of the generic name, Evolvulus, indicates the absence of twisting. This genus comprises plants that do not twine while forming part of a twiner family. The specific name, alsinoides, indicates similarity to plants of the Alsine genus.

Most plant parts of E. alsinoides, particularly stems and leaves, are silky from a hairy covering. The simple leaves are ovate to elliptic with tapering tips and bases, entire margins and very short petioles to stalkless. There is a slight fold along the midrib and a few spaced, ascending lateral veins along the soft, deep green blades.

The species distribution in South Africa is in the northeast, from KwaZulu-Natal, the provinces north of the Vaal River and the northeast of the Northern Cape, as well as tropical Africa.

The habitat is grassland, woodland and disturbed land, particularly cultivated fields, mostly in sandy soil and also in arid parts. The species is not considered to be threatened in its habitat early in the twenty first century.