Home » TYPES » Herbs » Evolvulus alsinoides flower
Back to Category Overview
Total images in all categories: 11,506
Total number of hits on all images: 6,499,115 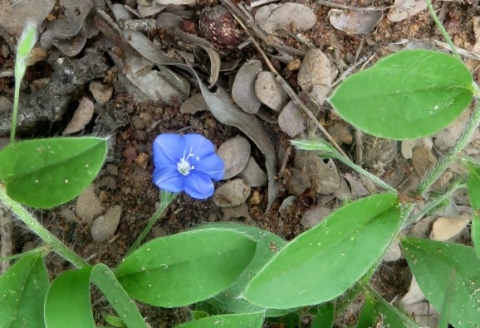 The corolla has a narrow, funnel-shaped tube, white inside to just beyond the mouth. The five spreading corolla lobes are blue, attached to each other in Convolvulaceae fashion, the lobe tips rounded. There is a double fold, narrowly triangular down the centre of each corolla lobe, from flower mouth to lobe tip. The occasional white-flowering plant occurs in this species. The corolla diameter is about 1 cm.

There are five white stamens arising from the middle section of the inside of the corolla tube, alternating with the corolla lobes. The flower has two styles. The white anthers and stigmas are all well exserted.

Flowering happens from spring to autumn. The fruit to follow is a nearly spherical capsule that dehisces, i.e. opening and releasing its seed when ripe.