Home » TYPES » Herbs » Erodium cicutarium flowers
Back to Category Overview
Total images in all categories: 10,855
Total number of hits on all images: 5,508,033 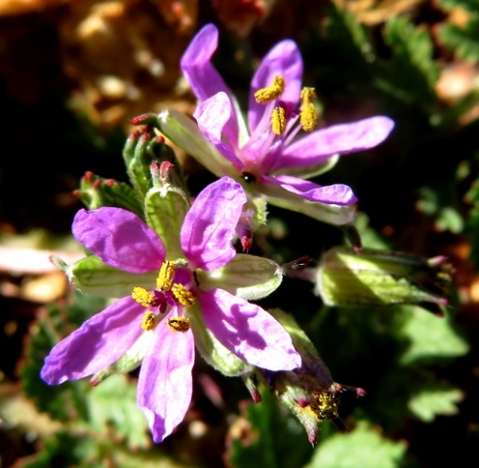 The radially symmetrical flowers of Erodium cicutarium grow in clusters of three to eight. They have a musky fragrance.

The five pink to purplish, elliptic petals spread widely. There are five stamens with yellow anthers and five sterile ones, staminodes that consist of filaments only. A disc of five oblong glands is present between the fertile stamens and the five sepals. Flowering happens late in winter to early spring.

The long, thin seedpod, traditionally likened to the bill of a stork as are fruits of plants in the Pelargonium genus, bursts open forming a spiral when ripe, sending the seeds fitted with feathery mini-parachutes into the air. The awn attached to the seed spirals in a drilling motion when aided by moisture, burying the seed in the ground (Le Roux, et al, 2005; Shearing and Van Heerden, 2008; Wikipedia).