Home » TYPES » Herbs » Dyschoriste setigera
Back to Category Overview
Total images in all categories: 11,769
Total number of hits on all images: 6,918,740 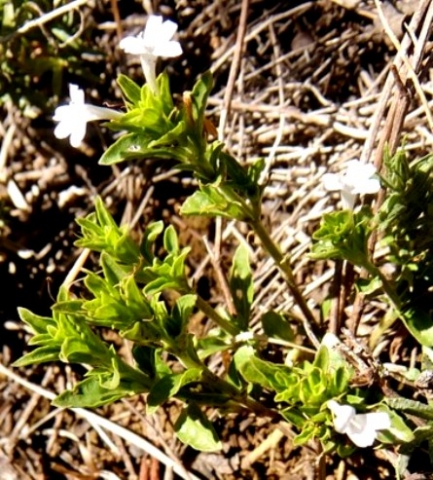 Dyschoriste setigera, previously Chaetacanthus setiger, is an evergreen perennial growing several stems from a woody rootstock to heights between 15 cm and 30 cm.

Its leaves, growing opposite on short stalks, are broadly ovate to rounded and soft-textured. The plant is hairy on leaves and stems, some hairs being stalks for glands.

The white flowers, two-lipped and tubular, grow from upper leaf axils. The upper lip is two-lobed, the lower one three-lobed, the lobes oblong and somewhat truncate, shorter than the tube. The stamens and style are slightly exserted. Flowers appear from late winter through summer.

The species distribution is widespread in South Africa, occurring in all provinces excepting the Northern Cape. It also grows in some neighbouring countries. The photo was taken in January at Damhoek on a southern slope of the Magaliesberg in Gauteng.

The habitat is diverse, including rocky grassland. The species is not considered to be threatened in its habitat early in the twenty first century (Van Wyk and Malan, 1997; Leistner, (Ed.), 2000; iSpot; http://redlist.sanbi.org).