Home » TYPES » Herbs » Erodium cicutarium
Back to Category Overview
Total images in all categories: 11,506
Total number of hits on all images: 6,499,159 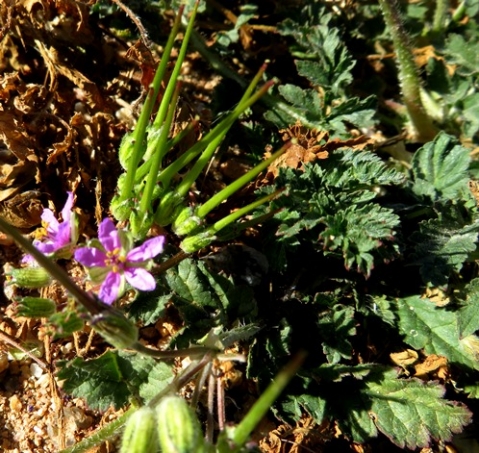 Erodium cicutarium, known as the common stork’s bill, is an exotic, a branching annual or biennial that spreads on the ground to 20 cm in diameter. Part of the Geraniaceae, the family relationship is divulged by the green fruit-shapes in picture, if not by the flowers.

The leaves growing on long hairy stalks are deeply double-lobed. The lobes are narrow and hairy with toothed margins. Leaves become about 9 cm long.

This plant was introduced from Europe, now a weed found in many parts of South Africa. The plants are grazed, often growing in disturbed areas (Le Roux, et al, 2005; Shearing and Van Heerden, 2008).