Home » TYPES » Herbs » Caesia contorta from behind
Back to Category Overview
Total images in all categories: 11,792
Total number of hits on all images: 6,949,132

Caesia contorta from behind 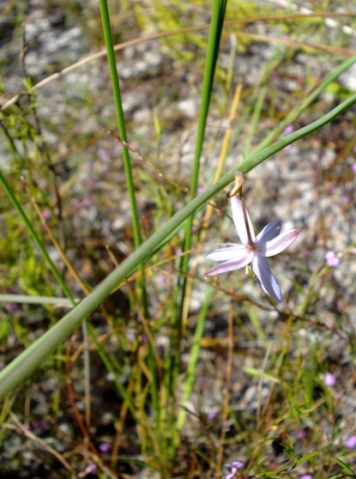 Seen from behind, the nodding flower of Caesia contorta shows its thin dark pedicel. At the pedicel base there is a pale brown bract, about oblong and curved, upon the sturdy green stalk. Dark blue central bands, longitudinally positioned upon the tepals, can be seen on some of them.

C. contorta flowers are commonly seen like this due to the sprawling habit of the branched panicles presenting their sparsely flowered racemes at odd angles. The species is not called contorta for nothing (Vlok and Schutte-Vlok, 2010; Bean and Johns, 2005; Manning and Goldblatt, 1996; iSpot).