Home » TYPES » Herbs » Caesia contorta green ovary
Back to Category Overview
Total images in all categories: 11,792
Total number of hits on all images: 6,949,230 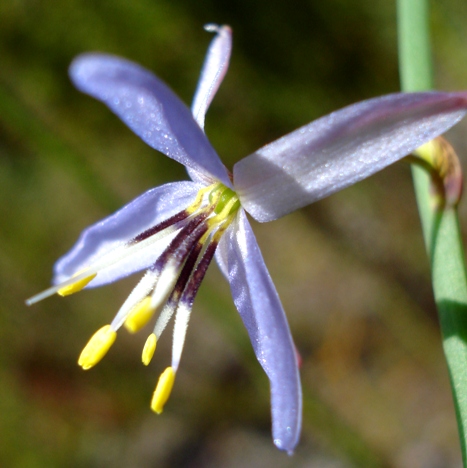 The green, superior ovary of Caesia contorta is clear to see at the base in the flower centre in picture. The filaments curve around it in their lowest, yellow sections to the respective tepal bases.

The very straight style, pale here, shows very little of a visible stigma at its tip. When the flower withers, the tepals twist notably. Flowering happens from late spring to early autumn. This one was seen in the Kogelberg early in November.

Caesia seeds, tiny pear-shaped ones with little white arils attached, are dispersed by ants that eat the arils (Vlok and Schutte-Vlok, 2010; Bean and Johns, 2005; Manning and Goldblatt, 1996; iSpot).