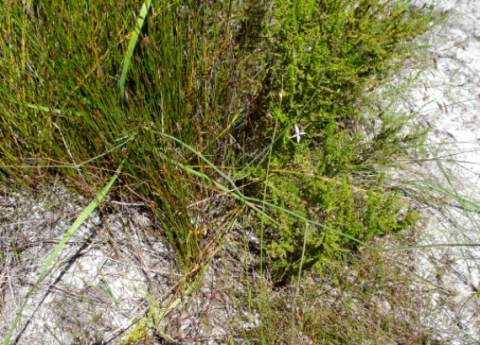 Caesia contorta, in Afrikaans called the sokkiesblom (socks flower), is a geophytic perennial, an evergreen with grass-like leaf tufts, growing from a small rhizome. The leaves are folded in their lower sections, becoming 30 cm long and 1 cm wide. When not flowering, Caesia plants (there are about 12 species in the genus), may be mistaken for grasses.

This plant grows in sandy soil on flats and slopes from Namaqualand to the Eastern Cape, maybe into KwaZulu-Natal. Variability over the range of the geographical distribution may still lead to some separation of the complex into more species. The plant is not considered threatened in habitat early in the twenty first century (Vlok and Schutte-Vlok, 2010; Bean and Johns, 2005; Manning and Goldblatt, 1996; iSpot; www.redlist.sanbi.org).