Home » TYPES » Herbs » Caesia contorta flower
Back to Category Overview
Total images in all categories: 11,769
Total number of hits on all images: 6,918,922 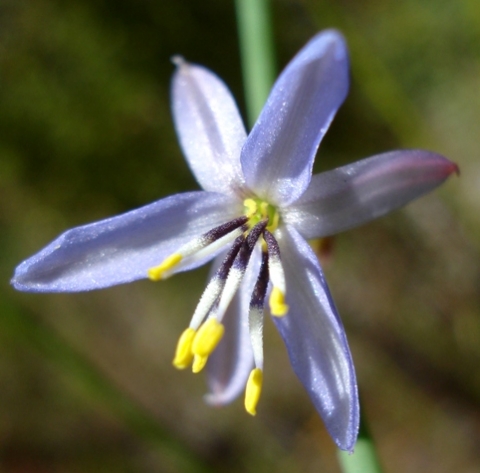 The inner three tepals of Caesia contorta curve back less than the outer three in this flower. The rounded tepal tips appear mucronate, showing tiny protrusions that curve variously.

Broad dark blue, almost black bands occur on the six filaments below the white sections that taper into the oblong, yellow, erect anthers. At the base the filaments have a short yellow section where they curve around the green ovary. This yellow section is longer on the flowers of some plants (Vlok and Schutte-Vlok, 2010; Bean and Johns, 2005; Manning and Goldblatt, 1996; iSpot).