Home » TYPES » Herbs » Ceratotheca triloba white flowers
Back to Category Overview
Total images in all categories: 11,638
Total number of hits on all images: 6,757,138 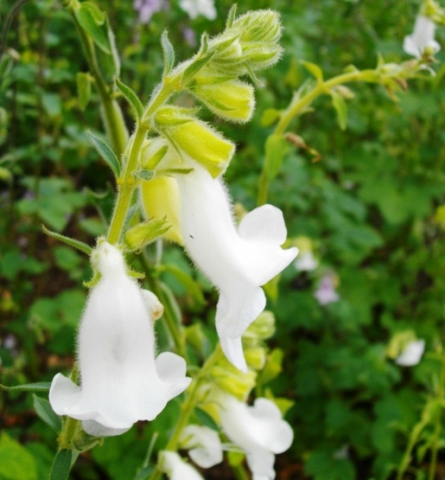 Ceratotheca triloba, the wild foxglove or in Afrikaans wildevingerhoedjie, belongs to the Pedaliaceae or sesame family. The genus name, Ceratotheca, originates from Greek. It refers to the fruit that is shaped like a horned capsule. Triloba refers to the three leaf lobes. There are no other members of the Ceratotheca genus growing naturally in South Africa.

The distribution of C. triloba includes both coastal Eastern Cape and KwaZulu-Natal, all the northern provinces of South Africa, as well as parts of Botswana, Zimbabwe, Swaziland and Mozambique. It is thus a summer rainfall plant that grows in open grassland, often in disturbed areas characterised by animal movement and along roadsides. The size, growth and flowering forms vary according to location within the wide area of the plant’s distribution.

The wild foxglove is a popular gardening subject, a status earned from features like its attractive flowers, long flowering season, ease of adaptation to garden conditions and its hardiness.

The leaves have sometimes been cooked as a vegetable dish by indigenous populations. The leaves are also used as an insect repellent; the plant emitting an unpleasant odour when crushed. A multitude of traditional medicinal uses have been recorded for this species (Joffe, 2001; www.plantzafrica.com).