Home » TYPES » Herbs » Ceropegia linearis subsp. woodii
Back to Category Overview
Total images in all categories: 11,662
Total number of hits on all images: 6,774,651 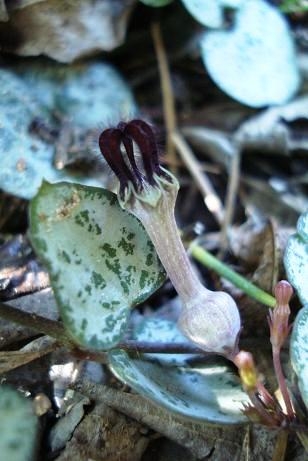 The leaves are small and heart-shaped with grey patterns above and purple colouring below. The flowers are pink and purple, tubular at the corolla base and lantern-shaped at the upper part, about 2cm long.

This is a popular house plant, often hanging over the edge of a suitable container. The rambling stems display the leaves and also the unusual flowers that appear in autumn and often stay during winter.

The species distribution is in the Western Cape and in the east of the country from the Eastern Cape to Limpopo. It is not considered to be threatened in its habitat early in the twenty first century (iNaturalist; www.rhs.org.uk; http://redlist.sanbi.org).