Home » TYPES » Herbs » Bolandia pinnatifida in two minds about colouring
Back to Category Overview
Total images in all categories: 11,656
Total number of hits on all images: 6,771,023 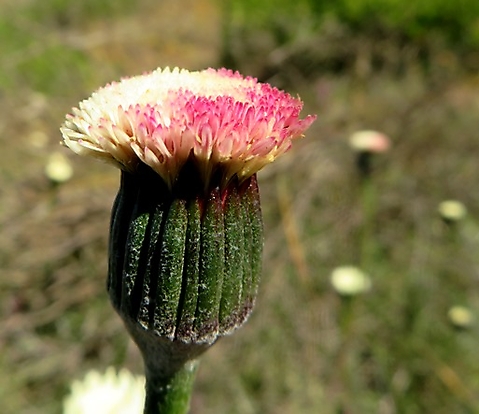 Pink-purple florets on Bolandia pinnatifida flowerheads are less seen than creamy white ones. The extra colouring is present in this Biedouw Valley stand of plants, occurring in only few flowerheads and inconsistently to one side of some heads only.

The finger-like involucral bracts with pointed tips hold the floret bases firmly together. Once the floret corollas of a head exceed the grasp of its involucre, it becomes another matter. As florets gradually open into funnel-shape, they push outwards at the top to gain the space required for stamen and style, also for pollinator access. This is not destructive but determined, like the behaviour of an animated spectator crowd, focussing elsewhere.

The sparse and uneven short white hairs on the involucre appear woolly, not nearly as dense as down on the conic receptacle (Bond and Goldblatt, 1984; iNaturalist).