Home » TYPES » Herbs » Centella triloba
Back to Category Overview
Total images in all categories: 11,792
Total number of hits on all images: 6,949,217 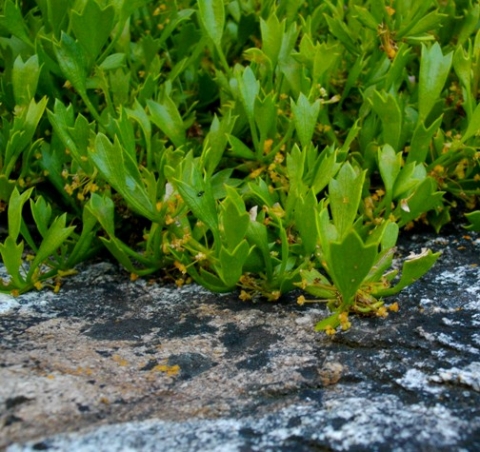 Centella triloba, commonly known as pennywort or in Afrikaans as varkoortjies (little pig-ears), is a sprawling shrub that forms cushions on rocks or hangs from them. Old stems become woody, reaching lengths of 50 cm, the branches ribbed.

The small, yellowish flowers are insignificant apart from being long-stalked. Flowering happens over a long season from winter to autumn. This plant was photographed in November in the Fernkloof Nature Reserve.

The species is endemic to the Western Cape, growing in the far southwest of the province from the Cape Peninsula to Agulhas and Robertson. The habitat is sandstone mountain slopes and rocky coastal flats. The species is not considered to be threatened in its habitat early in the twenty first century.

There are about 50 species of Centella in southern Africa. There is mention that the genus may be moved from the Apiaceae family to Araliaceae, or moved back there (Bean and Johns, 2005; Wikipedia; www.redlist.sanbi.org).