Home » TYPES » Herbs » Ceratotheca triloba leaves
Back to Category Overview
Total images in all categories: 11,792
Total number of hits on all images: 6,949,128 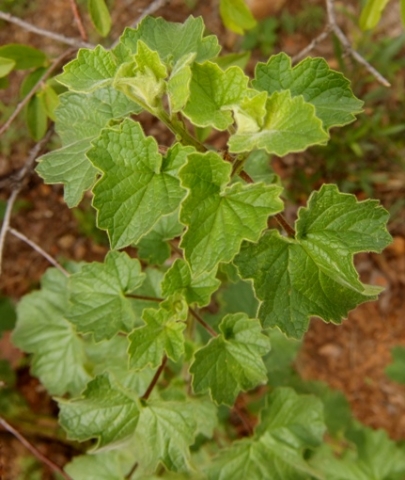 The opposite leaves of Ceratotheca triloba in picture show something of the three-lobed shape that gave the species its name. Angular toothing, irregular in shape and size, is present on the leaf margins.

Leaf surfaces have a quilted appearance from bulging between the sunken veins that fan out from the base into the three lobes, mainly the central one. More veins ascend laterally from the main vein of each lobe, supported by conspicuous, reticulated net-veining.

The lateral leaf lobes bulge in heart-shaped fashion at their bases, causing the base of the leaf itself to be positioned towards its centre in mature leaves; and rendering the word paradoxical (Manning, 2009; Pooley 1998).