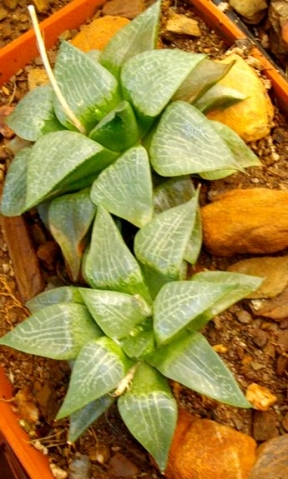 Haworthia emelyae var. comptoniana is a stemless leaf succulent growing rosettes that are usually solitary, partly buried in the ground and up to 12 cm in diameter.

The flat, triangular leaf tops point outward, supported by thickly succulent lower parts, obliquely keeled on the outside and defying distinction between leaf and stem. A leaf may be 5 cm long and 2 cm wide. The upper triangular parts are dark grey-green and translucent, covered in pale green, reticulated vein lines more developed longitudinally than laterally.

The inflorescence becomes 27 cm long, comprising a single raceme of about 18 white two-lipped flowers with green segment keels. About six of the spirally arranged flowers may be open simultaneously. Flowering happens in the latter part of winter.

The distribution is in the Little Karoo, particularly the Oudtshoorn area. The status of survival prospects of H. emelyae and its described varieties are not clear, as the identity of the plant (or plants) is blurred among those of similar haworthias. Extinction risk can be determined for homogeneous groups properly named, once the taxonomical studies bring clarity (Scott, 1985; Vlok and Schutte-Vlok, 2010; http://worldofsucculents.com).