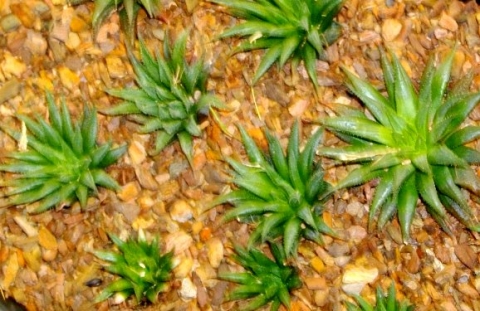 Although Haworthia heidelbergensis var. toonensis has been an accepted name until recently and maybe still should be considered so, the plant is probably becoming H. mirabilis var. heidelbergensis or something yet to be divulged. Whether the three recent or current varieties of H. heidelbergensis will all end in the same destination of a new identity or taxon remains to be seen.

This kind of confusion originates from earlier classifications based on appearance only being replaced by molecular analysis of geographically homogeneous plant populations. Delays in executing such studies are probably caused by the number of scientists specialising in the field and the financial resources for particular technical work in botany. Solutions in such cases may well come from faster and better technology rather than more botanists working in this field. Unless the project merely waits its turn in the queue or benefits from a qualified student taking a special interest.

The lance-shaped leaves are narrow, fresh green to yellow-green and succulent, tending to darken with age. The upper surfaces bulge on the young plants in picture living in cultivation. There are (sometimes) tiny teeth along the leaf margins and some recurving of the older, outer leaves of the rosette. Translucent areas are present on the leaves near their tips.

The plants have a small distribution along the Slangrivier, southwest of Heidelberg in the Western Cape. The habitat is dense coastal scrub, renosterbos or fynbos. The variety, such as it is until further developments, is considered to be vulnerable in its habitat early in the twenty first century (Scott, 1985; www.theplantlist.org; http://haworthia-gasteria.blogspot.co.za; www.redlist.sanbi.org).