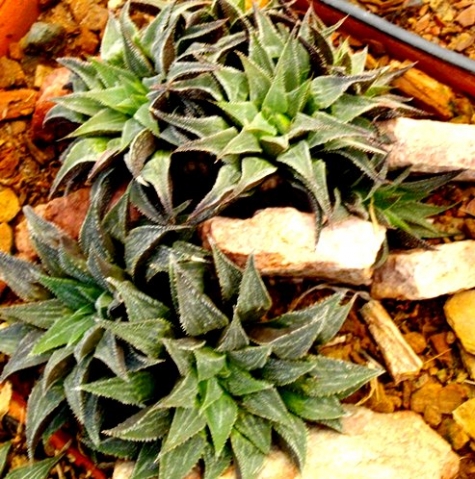 Haworthia emelyae var. major is a dwarf leaf succulent, a stemless perennial usually growing a solitary leaf rosette up to 8 cm in diameter.

Soft white marginal teeth and tiny surface tubercles, sometimes in longitudinal rows, give the dark green or purple leaf surfaces (red in winter) a rough texture. The upper, translucent leaf part is triangular, becoming horizontal and flat in older leaves. The leaf tapers to an acutely pointed tip carrying a small spine. There may be a row of tiny spines or teeth as well on the leaf keel under the recurved leaf tips.

The inflorescence becomes 30 cm tall, the small, funnel-shaped flower tubes white with green keels on their perianth segments. The major name of the variety is probably earned by the unusually large flowers of this plant.

The distribution of this variety is in a part of the southern Little Karoo in the Western Cape. The habitat is semi-arid scrubland where these plants benefit from shelter and shade provided by shrubs. Although the jury is still out as to the conservation status of this plant due to expected reassessment of the species, some interrelated species, as well as the intraspecies differentiation into varieties, an earlier judgment has indicated this variety to be endangered early in the twenty first century (www.llifle.com; http://worldofsucculents.com; www.redlist.sanbi.org).