Home » GENERA G-H » Haworthia » Haworthia lockwoodii
Back to Category Overview
Total images in all categories: 11,037
Total number of hits on all images: 5,688,419 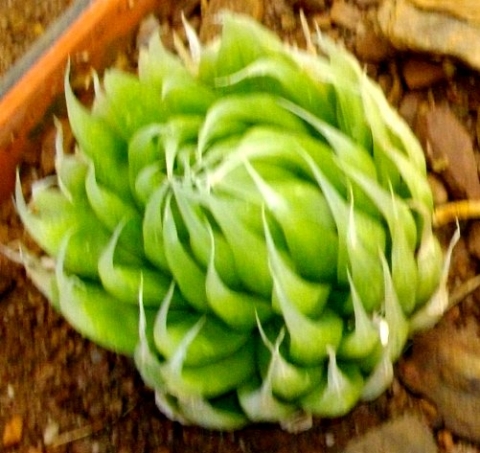 The thickly succulent leaves are lance-shaped to oblong and narrow, attenuating to thin, elongated tips. The leaf becomes about 3 mm wide and as thick. About 50 leaves grow in one rosette. Leaf colour is yellowish green.

The inflorescence becomes about 22 cm tall. The single raceme bears about 35 flowers, 11 of which may be open simultaneously. The perianth, two-lipped and 14 mm long, is white with green keel lines on the segments; the segment tips recurving. The flower tube is funnel-shaped, about 3 mm wide. Flowering happens early in spring.

The species distribution is limited to the Laingsburg region in the Western Cape, particularly the Witteberge. The plant grows in succulent Karoo shrubland on dry, north-facing, quartzite slopes, often in the shade of shrubs or among big stones.

The species is considered to be vulnerable in its habitat early in the twenty first century. This has been caused by large illegal plant collecting and habitat degradation from overgrazing.

H mucronata is similar to this species with distribution further south and east in the Little Karoo (Scott, 1985; http://haworthia-gasteria.blogspot.co.za; www.redlist.sanbi.org).