Home » GENERA G-H » Haworthia » Haworthia cymbiformis
Back to Category Overview
Total images in all categories: 10,856
Total number of hits on all images: 5,516,194 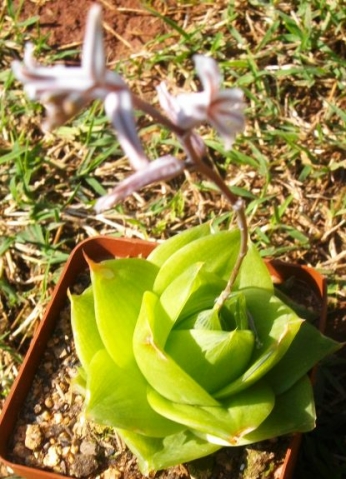 Haworthia cymbiformis is a highly variable species with windowed or partly translucent, soft green leaves. It varies in leaf and rosette size as well as in leaf shape and thickness. The leaves have variable patches or lines of the translucent areas. They attenuate to sharp points from a squat or broad to a narrower, elongated triangular base.

The species distribution ranges from Port Elizabeth to about East London in the Eastern Cape in a broad coastal and inland belt. The region is not particularly large when considering that about ten varieties of this plant have been named, all occurring here. Stands of the varieties occur, each colony comparatively stable in representing its kind, but several hybrids with other plants have been recorded.

The range of recorded names and name changes for this plant is quite impressive, reflecting the variability within the species (http://haworthia-gasteria.blogspot.com, www.haworthia.org.uk, www.desert-tropicals.com).