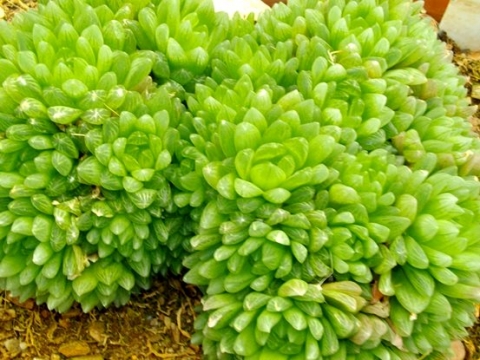 Haworthia cooperi var. picturata is a dwarf leaf succulent that is stemless, but may grow vigorously into large clumps as in the photo.

This variety of H. cooperi has much rounding or squatness to the pale yellowish green leaves. The inner leaf surfaces are flat or nearly so, the outer ones bulging with margins more rounded than angular, and no trace of spines or serration. The stubby upper leaf part tapers fast from the sides and back to a sharp leaf-tip. The distended back creates the impression of the tip leaning slightly inward, although mostly it doesn’t here.

The leaves are variable even in the same rosette if minutiae are considered. Inspect, for instance, the size, surface lines and perimeter delineation of the translucent windows at the leaf tops.

About 30 to 60 leaves grow in a rosette, probably fewer in those plants with more rosettes in their mounded clump.

The inflorescence is a simple, lax raceme bearing about 20 flowers of which four may be open at a time. The flower is white with a hint of pink, the keels of the perianth segments (petals) are green on the slightly curved and funnel-shaped flower tube. Flowering happens late in spring and early in summer.

The distribution of the variety is in the Hankey and Patensie area of the Eastern Cape (Scott, 1985; http://haworthia-gasteria.blogspot.co.za; www.redlist.sanbi.org).