Home » GENERA G-H » Haworthia » Haworthia bayeri
Back to Category Overview
Total images in all categories: 10,861
Total number of hits on all images: 5,525,059 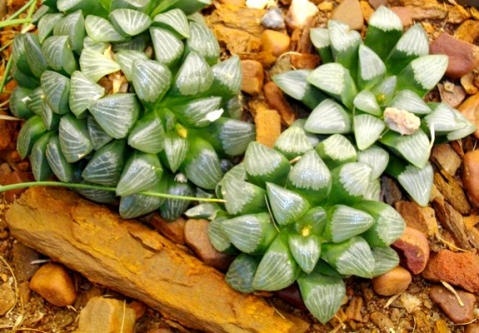 Previous
Image 5 of 51
Next

Haworthia bayeri is a stemless leaf succulent barely protruding above ground level when not in flower. The species does not branch much from offsets. One of the cultivated plants in picture has been treated so well that it has managed a clump of three rosettes already. The average plant is thought to last for more than a decade.

The inflorescence of H. bayeri is a raceme of about 7 cm on a long stalk, the inflorescence 28 cm tall in all. Sterile and floral bracts, membranous but soon becoming papery are present, but more importantly about 15 spirally arranged flowers and buds. Only one or two of them will be open at a time.

The perianths or flower tubes are dull white with brown keels to the individual segments. Each funnel-shaped perianth becomes about 14 mm long.

The species distribution in the Little Karoo straddles the border between the Western and Eastern Cape, continuing northeast to around Willowmore. The plant grows in gravelly loam soils that is hard and firm, usually in shade of veld where shrubs and small trees like guarri, asbos and sandolien would grow.

The species is endangered early in the twenty first century, due to habitat destruction from farming, but also from succulent collection (Scott, 1985; Vlok and Schutte-Vlok, 2010; www.redlist.sanbi.org).