Home » GENERA G-H » Haworthia » Haworthia arachnoidea branched
Back to Category Overview
Total images in all categories: 11,104
Total number of hits on all images: 5,772,725 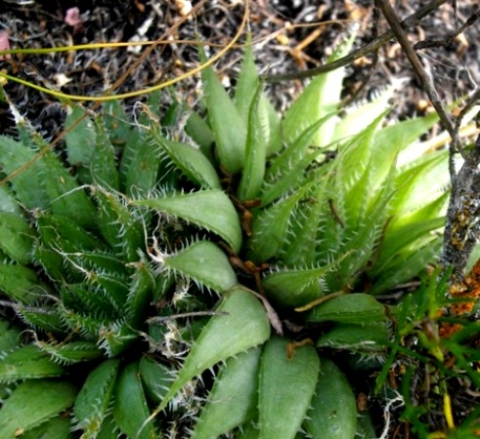 Previous
Image 2 of 51
Next

Haworthia arachnoidea often forms clusters via suckering as plants mature. The plant in the photo lives in renosterveld west of Barrydale. It has so far managed to grow just the two joined rosettes, living comfortably under a bush that absorbs excessive effects of temperature and other climatic conditions. Protective services rendered by the bush include the filtering of sunlight and the sheltering of its resident protege from all sorts of environmental threats.

Maybe the transaction is balanced by the Haworthia reducing unwanted traffic? Visitors under the bush might compact the earth and scatter the dry leaves serving to mulch the surface for moisture conservation. Whatever the mutual satisfaction with neighbourly arrangements may be, the couple of Haworthia rosettes is pulled together by a common base and roots, allowing them to share benefits received via their roots and differently angled rosette faces.

The curly white hairs that earned the plant the specific name of arachnoidea (spidery), are spaced evenly on the leaf margins and the keels on the lower surfaces of the leaves. Otherwise the thick, succulent leaves are hairless and smooth. Faint white markings, little spots and lines are visible on the pale green leaf surfaces that may also be reddish in full sunlight and during hot, dry seasons (Scott, 1985).