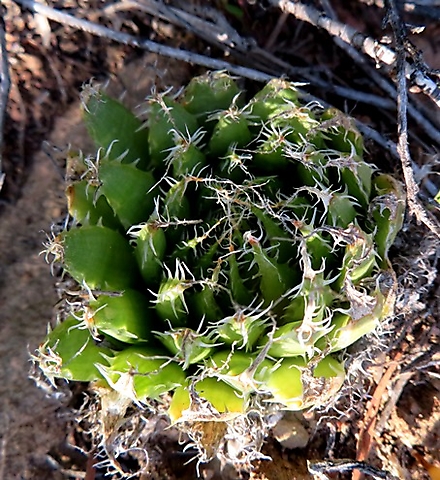 Haworthia is a genus of stemless or short-stemmed, perennial leaf succulents in the Asphodelaceae or aloe family.

The plants are small, up to 30 cm in height. The roots are usually succulent, cylindrical or rarely spindle-shaped. The plants grow solitary, branch into sometimes large clusters or creep, growing stolons and suckering freely.

The leaves are soft, succulent and windowed, growing in rosettes, spiralling and overlapping or rarely distichous (in opposite arrays). The rosettes are often ground-hugging or half-sunken in the ground. The leaf-shape is thickly triangular, lanceolate, oblanceolate or linear, the upper surface often flat, the lower one roundly convex. Small, marginal teeth or hairs and sometimes a terminal bristle may occur, or the margins may be smooth.

The inflorescence is a dense or lax raceme or panicle with bracts at the joints. The small, stalked flowers have tubular perianths, usually white with only a slight curve in the tube and the segments fused near the base. The flowers are usually two-lipped with three segment tips curving up, the opposite three down. The six stamens are mostly included or slightly exserted. The three-locular ovary is superior, the style tapering to a tiny stigma.

The capsule is mostly cylindrical, blunt-tipped and often woody when dry. The small seeds are angled, dark and slightly winged.

After separation of particularly the Tulista and Haworthiopsis genera from Haworthia, there are about 60 species left in this genus. They all occur in southern Africa. The classification appears, however, still to contain ambiguities. Finality, permanence and certainty are not features occurring as commonly in family structure stories as one might like.