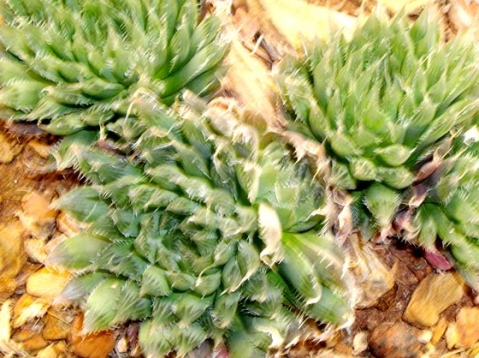 Previous
Image 8 of 50
Next

Haworthia cooperi var. cooperi is a dwarf, stemless, leaf succulent. It takes its time over adding more rosettes at stolon tips to form a clump.

The leaves usually have soft marginal teeth or spines as does the plant in picture. Leaf tips may attenuate to elongated (dry) awns as seen here, or end abruptly in square or truncated fashion. Upper leaf parts are translucent, the window letting in sunlight. Some opaque, vertical vein lines on the surface penetrate the window area, but not to the leaf tip. The leaf base is mostly out of sight, partly buried in the ground.

The distribution in nature lies in a small, northerly part of the Eastern Province near Stutterheim, particularly around Thomas River. The plants grow on rocky, grassed slopes or grassland flats, often under thorn trees. The variety is not considered to be threatened in its habitat early in the twenty first century.

Geographic changes into neighbouring Haworthia species distributions are gradual or continuous, rather than discrete or clear-cut. This is so in the case of H. pringlei to the west and H. bolusii var. blackbeardiana to the north. These grey areas of form transition in a species (or two of them) give taxonomists grey hair (www.cactus-art.biz; http://haworthia-gasteria.blogspot.co.za; www.redlist.sanbi.org).