Home » GENERA G-H » Haworthia » Haworthia chloracantha
Back to Category Overview
Total images in all categories: 11,104
Total number of hits on all images: 5,771,875 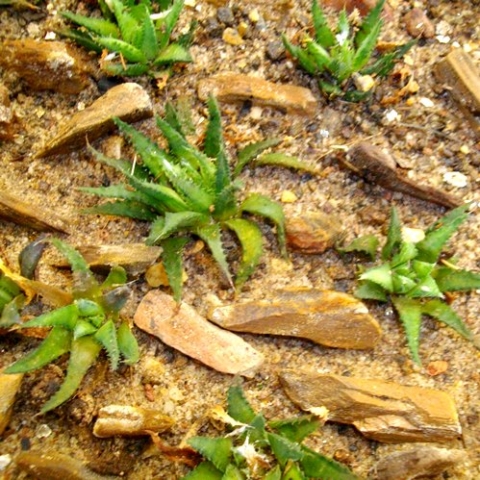 Previous
Image 7 of 51
Next

Haworthia chloracantha is a stemless leaf succulent. The dwarf plant forms clumps of rosettes reaching 3 cm to 6 cm in height. Rosettes vary in diameter from 3,5 cm to 5 cm, growing from 20 to 30 leaves.

The slender, tapering leaves are pale to deep green, sometimes blue-green. They may have notable marginal teeth, spaced and soft as in the photo, or obscure. Leaf curvature is variable, outer ones often outwards, inner ones inwards, although as easily in other directions.

The about ten small white flowers with green keels spiral in a lax raceme of 6 cm, the inflorescence about 21 cm tall. Flowering happens in early autumn.

This range-restricted species grows in the southern Cape near the Gourits River, Herbertsdale and the Great Brak River in a diminishing and fragmented distribution. The habitat is fynbos, thicket, grass or renosterveld. The plant population is reducing caused by encroaching roads, quarries, farms, coastal development, plant collection and invasive alien vegetation. The species is considered to be endangered early in the twenty first century.