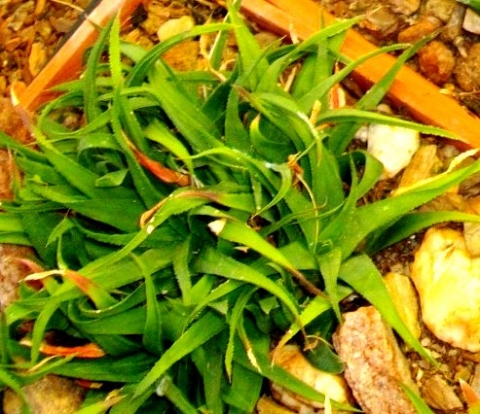 Haworthia floribunda var. major is a stemless leaf succulent growing clumps of leaf rosettes. The rosettes are usually between 6 cm and 7 cm in diameter, each carrying about 20 leaves.

The long, narrow leaves are lance-shaped and channelled, tapering and twisting to thin, elongated tips. The young leaves in the centre are erect, the older ones around them ascending to spreading. The leaf margins are finely toothed, the leaf colour varying from dark green to bright, yellowish green. A leaf becomes about 3,5 cm long, from 4 mm to 9 mm wide and up to 8 mm thick at the base.

The white flowers have green keels upon their perianth segments, the perianth becoming about 13 mm long.

The distribution of the overall species of H. floribunda lies in a small area in the Western Cape around Swellendam and eastwards to the Gourits River. The three recognised varieties grow in parts of this terrain, shaded slopes covered in fynbos or renosterveld vegetation, the plants among grass and stones. Var. major occurs (at least) in the Swellendam area.

The three varieties fare differently in the survival stakes, var. major considered to be critically endangered in its habitat early in the twenty first century (Scott, 1985; Bond and Goldblatt, 1984; http://haworthia-gasteria.blogspot.co.za; www.redlist.sanbi.org).