Home » GENERA G-H » Haworthia » Haworthia arachnoidea
Back to Category Overview
Total images in all categories: 11,104
Total number of hits on all images: 5,771,895 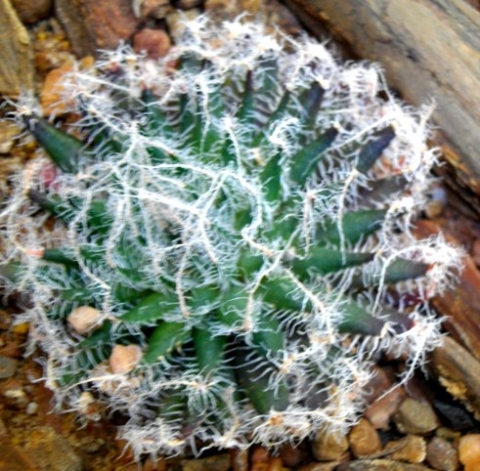 Previous
Image 1 of 51
Next

Haworthia arachnoidea is a variable, stemless, leaf succulent, the leaves in compact rosettes. In its hairier forms, the plant deserves its Afrikaans common name of spinnekopnes (spider’s nest), suggesting a hirsute, cobwebby affair.

Another common name, cobweb aloe, highlights the same feature, as well as the days when the plant was still classified with the aloes. Both genera, Aloe and Haworthia, form part of the Asphodelaceae family that was earlier separated from the lilies. Look closely, the flower structures of these monocots (and others) have family resemblances.

Whitish hairs are spaced up the leaf margins and keels, similar to the arrangement seen on the haworthias that have marginal teeth or spines. These hairs vary in density and length on H. arachnoidea.

In picture there are additional features, whitish leaf-tip awns or wiry protuberances projecting well beyond leaf-tips and curving over the plant, contributing to the cobwebby appearance. This looks similar to what is found on H. bolusii, another name featuring among these related plants.

H. arachnoidea has a wide-ranging distribution, from Namaqualand across the Karoo and Little Karoo to inland parts of the Eastern Cape.

The habitat is shady patches under shrubs on arid and semi-arid, rocky slopes. The soft rosettes are sometimes partly embedded in the earth, hiding lower leaf parts from the harsh climatic conditions of the plant’s habitat. The species is not considered to be threatened in its habitat early in the twenty first century.

There are six varieties of the species recognised at the time of writing (Vlok and Schutte-Vlok, 2010; Scott, 1985; http://redlist.sanbi.org).