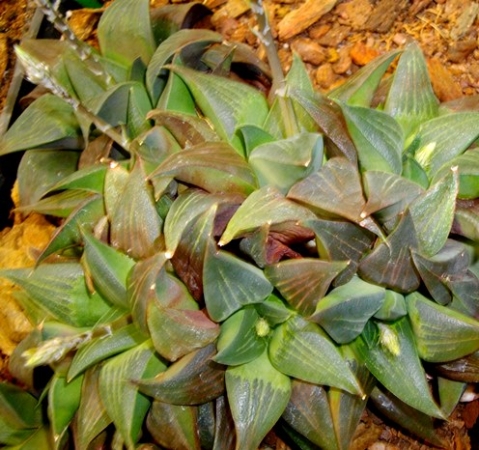 Haworthia magnifica var. magnifica is a stemless leaf succulent forming clumps of leaf rosettes. A mature rosette measures 8 cm across. The healthy clump accumulated here shows the abundant succulence to be expected from plants cultivated with care and knowledge. The photo was taken in the Karoo Desert National Botanical Garden.

There is an abrupt transition from the opaque, pale green leaf part at the base on the upper surface to the window triangle of dark translucence at the leaf tip. The pale green lines or veins attempting to reach the tip across the dark window don’t quite make it.

Several inflorescence beginnings arise like arrow tips from rosette centres. If there had been a command to launch arrows, the officer in charge might not have been happy with the uneven response. Plants do this in their own quiet time when ready.

H. magnifica may well disappear as a species, being absorbed in H. mirabilis. When it was recognised as a species on its own, some of the constituent varieties were considered to be threatened in habitat. This excludes var. magnifica that had a stable population causing least concern. This was the case in 2009.

The percentage of plants for which survival prospects in nature increases with successive evaluations is less than 50% and possibly decreasing. This reflects on the importance that humanity attaches to biodiversity, not on the efforts of relatively few that work in the field. The choice between continually growing human needs and the preservation of other species in nature is made by humans (www.redlist.sanbi.org).