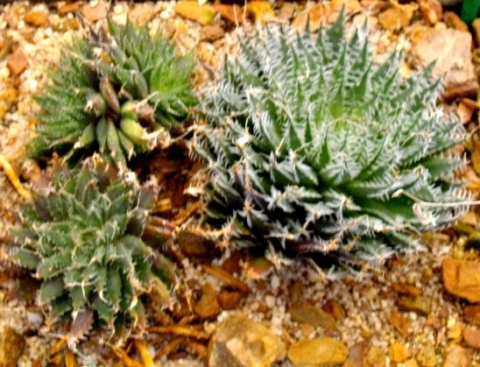 The leaves are lance-shaped, attenuating to elongated, awn-like tips. The upper surface is nearly flat to slightly convex, the lower one well rounded. Small tubercles and translucent areas are scattered along both surfaces. The leaf colour is dark green or brownish green to purplish, depending on the season. The leaf margins as well as the keels have long thin teeth, whitish and soft. The leaves become 12 mm to 20 mm long and 5 mm to 8 mm wide.

The inflorescence consisting of an unbranched, lax raceme becomes 23 cm tall. About 10 flowers are borne, arranged spirally and spreading along the 5 cm long raceme. Only about three flowers are open at a time. Their perianths are white, their segments green-keeled. Flowering happens in summer.

The distribution is in the Western and Eastern Cape. The habitat is Nama Karoo or succulent Karoo where the plants typically grow on cliff faces. The variety is considered to be vulnerable early in the twenty first century (Scott, 1985; www.redlist.sanbi.org).